This article details the VRs in the 2nd generation Apharmd series.

The impact of Operation Moongate, which began at the start of V.C.a0, collapsed the giant enterprise state DN Corp., which was the basis of OT (OverTechnology), the foundation of Virturaroid development. Flesh Refoe (FR-08), which has emerged since then, did not favor or attempt VR development for the show.

In response to the intentions of FR-08, many plants that had engaged in VR development until then decided to cancel or withdraw from the project, and move on to other developments. On the other hand, there were a few who were unable to ride the bandwagon, and were truncated as a result.

Most especially, this trend is remarkable in the VR manufactory under the former 2nd Plant enterprise state Transvaal (TV-02), and to their inconvenience, the latest VR made by themselves has intruded into DNA's combat industry. And even those who delighted in causing trouble have appeared.

It is an organization called RNA, which was born

More to be added

The first fuselage that came to be called a "2nd generation VR", the most advanced model by V.C.a2.

Progress on mobile performance, especially its attitude control technology in high-speed maneuvers, has been remarkable, and it was difficult to mutually match this in a 1st generation VR. The streamlined V-Converter is extremely powerful, and has succeeded in commercializing a new defensive system dubbed "V-Armor", thanks to its superfluous output. Initially, RNA and DNA were strongly oriented on MBVs, this machine is a highly versatile fuselage developed on an extension of that idea.

As mentioned above, it is an extremely robust and versatile fuselage structure with an OS for the FCS with a high degree of completeness, and by equipping and operating various weapons and equipment of different lines according to necessity, further developability was guaranteed.

As a result, it has seen active service over a long period of time in all theaters of battle and battlefields, it has produced a variety of derived types that can be said to be exceptional as the 2nd generation VR, it was widely used as a base fuselage that later creates various variations of the Apharmd series. 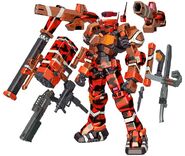 Adaptability of the 2nd generation Apharmd
Community content is available under CC-BY-SA unless otherwise noted.
Advertisement