Edit
watch 01:36
We're Getting Mutants in the MCU - The Loop
Do you like this video?
Play Sound

I am the power, I am the roaring thunder: Ye, the all-mighties under the heaven, heed my name and tremble with fear: For I am the ultimate terror in color of raven.

The HBV-05-E Raiden is a playable Virtuaroid featured in Cyber Troopers Virtual-On: Operation Moongate. It was one of the very first of the 1st generation Virtuaroids, the other being the MBV-04-G Temjin.

The Raiden is a Heavy Battle Virtuaroid (HBV), featuring heavy-duty armor and extreme firepower. While the defensive mechanisms make the Raiden much slower than the Temjin, it is also far more durable. As for its armaments, the Raiden is armed with a rapid-firing Zig-13 bazooka in its right hand, and deploys moving landmines called Ground Bombs from its left hand. The Ground Bomb slides among the ground like a curling stone before detonating with a low-slung explosion with a wide blast radius. However, the VR's most devastating weapon is a pair of Ali-02r laser irradiator cannons mounted on its shoulders, which were salvaged from 26 battlecruisers. With these high-powered weapons, the original purpose of the Raiden unit was to intercept and destroy enemy spacecraft before they could reach the Earth's atmosphere. In combat applications, the lasers can annihilate most thinner-skinned Virtuaroids or, at the very least, deal heavy damage to them, albeit the recharge time is slow and they have minimal homing ability.

The Raiden had originally started out as a machine in the XMU (eXperimental Master Unit) project under the model code XMU-05-B. After the V-Project was established, the XMU-05-B was redesigned with the technology of the V-Converter in mind, resulting in the prototype XAV-05-t01. Designed as a fire support Virtuaroid and retrofitted with a V-Converter, the XAV-05-t01's skeletal frame was prudently organized within the scope of the technical level of the Temjin's frame. In the XAV-05-t01's movement test, its cruising time had lasted more than 10 minutes with uniformly numerical results, satisfying DN Corp. officials.

However, a main concern is the Virtuaroid's armament. The XAV-05-t01 was armed with a core-contained beam launcher, whose firepower proved less than ideal for the fire support role. A substitute candidate was discussed for the t01's primary weapon for the fire support role, a pair of Ali-02a anti-ship laser irradiator cannons. The Ali-02a lasers were a compact, spacecraft-mounted weapon used against enemy battleships, possessing immense firepower at short- to mid-range. However, the weapons were too heavy for the t01's skeletal structure, so a new frame had to be redesigned to accommodate the lasers. As a result, the Virtuaroid was re-designated the XAV-05-t02. When fitted with the Ali-02a lasers on its shoulders, the t02's mobility and maneuverability was substantially decreased. In addition, it was top-heavy and the avionics and fire control system, which carried over from the t01, did not correspond with the lasers. The development schedule of the XAV-05 had also proven to be extremely taxing, as well as violently hasty with minimal regard to financial expenses and monetary liabilities which would be racked up in the process.

The XAV-05-t02 was completed on its phenomenally short schedule; it was originally classified as a Support Attack Virtuaroid (SAV-05) in reference to its fire support role. However, a new code was introduced by the tactics division, HBV (Heavy Battle Virtuaroid). This happened following a review of the machine's immense firepower, especially with its Ali-02r (re-designated from Ali-02a) lasers. It was thus that the finalized service code would be HBV-05 and the new Virtuaroid was given the name "Raiden", which would be known as the stuff of legends.

Originally, DN was planning on manufacturing 120 Raiden VRs. However, the officials' eyes widened when the figures for the production budget were accounted for. The massive cost of the Raiden's development schedule, which was kept under a tight lid, had finally surfaced at that point. The production cost of a single Raiden VR is equivalent to that of twenty-one MBV-04 Temjins. Matters deteriorated when the Ali-02r lasers equipped by the prototype Raiden fulfilled their role a little too well. Even worst, Telefunken, the company which produced the Ali-02 lasers, already had its problems in the hands of the DN Corp, which had to acquire Telefunken's remaining line of lasers for the production Raidens. In the first place, there was almost no certainty for immediate production of Ali-02 lasers. It was hopeless, considering the time that it would take to construct a Raiden VR. No matter how early that a customer backs out, a Raiden takes five years (at the very least) to manufacture.

These problems resulted from amateurish work on the part of information management, and the Chief Executive Committee was outraged at this. There was a heavy amount of blame placed on 0 Plant's administrative staff as a consequence. It was decided from there, that the maximum number of Raiden VRs that could be manufactured physically is at 40 units. Furthermore, its ludicrous production costs meant that even fewer could be made. Only twenty-six Raiden VRs, including the HBV-05-D pre-production prototype, were ever produced. 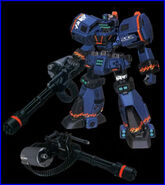 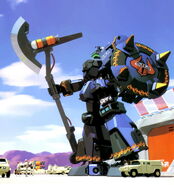 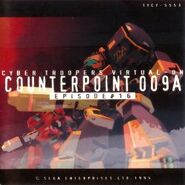 2 Raidens on Counterpoint 009A CD Cover