Jaguarandi (Japanese: ヤガランデ Yagarande) is a recurring, Virtuaroid-like entity seen in the lore of the Cyber Troopers Virtual-On series. It is fought as a boss in Operation Moongate, Force, and in MARZ.

During one of the many tests that the DN Corp. conducted to find prospective VR pilots with a high VOP rating, the consciousness of a young pilot was absorbed into a Raiden during the Reverse-Conversion process, mind-melding the controller and the machine. The result was a horror-inducing glitch and mutation in the M.S.B.S.'s gameplay. Should a player succeed in disengaging against the computers made to challenge the pilot, the bug will manifest itself in the form of a mutated Raiden known as Jaguarandi (pronounced "ya-ga-ran-dee"). This particular entity is armed to the teeth with a spreading laser and powerful homing explosives.

While the armament has been confirmed by reports, the Jaguarandi's size and appearance has varied greatly. Respective eyewitnesses testify to have seen it as red, green, and many other colours. Certain players claim it was as large as a battleship, while some swear blind it was as small as a Dorkas. Regardless of the specific details, one thing is certain; while Jaguarandi has proven to be significantly irritating to players of the M.S.B.S. control games, DN found it to be nothing more than a generic bug, and have no plans whatsoever to remove it from the program.

The greatest, strongest, and most brutal God of Destruction ever encountered by mankind in the Virtual Century. Taking a form similar to a VR, it appeared without its true nature being clear and both size and ability deviate greatly from that category.

Unfortunately, details on the actual condition of this machine have not been clarified yet. Since there are no development records in any of the existing plants, the theory that it is another sort of VR-like figure has more credence in recent years. In V.C.0090, although there was a theory that Anbel IV was somehow involved in the development of this machine, the truth is not certain.

By the end of V.C.009f, DNA, which entered the center of the 4th Plant in a campaign to regain control of it from Drammen, suffered catastrophic damage. Many surviving DNA soldiers from the disaster, which is referred to as the "Scourge of Jaguarandi", were reduced to a vegetable-like state with their consciousness lost, but there were a few healthy individuals among them. According to their testimony, the unit encountered an "illusion of Jaguarandi" within the plant. Generally, this was regarded as the first sighting of this machine.

Even by analogy from limited data, the machine possessed explosive attack power unmatched by any existing weapons. Its drive to destruction is indiscriminate, exerting devastating power, even if it is due to the illusion. Its fury is well-proven in Wild Launcher V.C.a5.

As it stands, no reports were made that the machine works after it is fully materialized. However, it is said that if such a thing were to happen, both the Earth and the entire Solar System would collapse in an instant.

"What is the Scourge of Jaguarandi?"[]

In general, the incident known as the "Scourge of Jaguarandi" occcurred in the 4th Plant by the end of V.C.009f. It was at the time that DNA entered into the center of the 4th Plant to recapture it, only to suffer catastrophic damage to their forces. *It was later that VCa's OMG had converged, that the DNA that entered the center for the recruitment of the plant suffered catastrophic devastation, as DN company It is speculated that the following situation occurred by linking fragmentary information after bankruptcy.

In the central area of the ancient ruins, the central building of the 4th Plant, there was a huge V-Crystal, which would later be known as the Earth Crystal. When the incoming corps. witnessed its grandeur as the forefront of the recapture operation, all DNA troops that were deployed inside and outside of the plant ceased all communications at once.

Most of the rescued survivors had lost consciousness and were left in a vegetative state, but there were a few healthy individuals among them. According to their testimony, the unit encountered an "illusion of Jaguarandi" within the plant. They were frightened by their fears, and told their parts of the story in fragmented words.

"...I did not listen to anything and I could not see anything. But...something that I don't understand something is deep inside my heart...There is a dull pain like suddenly stabbing... ...,right after that, I felt like my own consciousness spreading all at once...I am desperate to stay trampled It was. After that, I do not remember anything..."

There several other soldiers who heard similar words to what was mentioned in the above statement. Their testimonies taken together, the scream of the problem seemed to be a question of content; "011...? Jaguarandi, you're whole...!" However, it has not been clarified yet as to who the boy is, and it is not yet clear whether the owner of the voice is actually a boy or not.

Initially, what they saw and heard was thought to be hallucinations due to the severe Virtual-On phenomenon that was inadvertently caused by careless intrusion into the Earth Crystal's sphere of influence.

However, as time went on, it became realized that there are many aspects that cannot be necessarily said. In fact, even in Wild Launcher V.C.a5, the illusion of Jaguarandi is emerging in the SBRV Forbidden Zone that spreads around the 4th Plant. This phenomenon is presumed to be caused by a Moon Crystal in V.C.009f and a semi-awakened Earth Crystal acting as a catalyst. But hard evidence of this has not been found yet. However, if this hypothesis is correct, then there is the possibility that Jaguarandi may become completely materialized when the Earth Crystal fully awakens in earnest. This is a disastrous situation that would lead to the devastation of the Earth and humankind.

N/A
Jaguarandi returns in Cyber Troopers Virtual-On Force, as massive and ferocious as ever, as well as more agile.

With the threat of the Phantom Beast Trooper looming as it began manifesting from the old M.S.B.S. v3.33 control terminals, L'ln Plajiner developed the VR-011 Guarayakha for the express purpose of capturing and containing Jaguarandi so that humanity could study it.

However, much like with the VR-017 Ice Doll (the prototype of the SGV-417 Angelan), this ended in failure. Jaguarandi proved too powerful to be contained, so it used the Guarayakha as a conduit to materialize into the physical world. When the transformation became reversed, the Guarayakha was left non-functional with its pilot dead. Nonetheless, the Guarayakha was put into production as the TG-11-M Guarayakha, which is capable of transforming into a smaller version of Jaguarandi.

It also appears as a boss in Cyber Troopers Virtual-On MARZ, in both the Challenge Mode and the Dramatic Mode.

In some cases, in both Force and MARZ, the player would fight not one, but TWO of Jaguarandis at the same time, presenting an even tougher challenge if they're going it alone.

Jaguarandi comes with new combative capabilities for Force and MARZ. First is its RW, the Buster R, which fires very large beam shots with homing capabilities that can knock down any opponent. Then there is the LW, the Buster L, which fires a slow-moving, bouncing plasma bomb with homing ability. It detonates on contact, temporarily disabling the opponent's ranged attacks. Lastly is the CW, the TCF Eraser, an eight-way sweeping laser spread that is hard to avoid. If its ranged weapons aren't bad enough, Jagauarandi is also capable of close combat, performing hooking attacks with its massive strength to blow away and knock over opponents.

Jaguarandi is playable in both the Sega Saturn port of Operation Moongate and in Sega AGES 2500 Vol. 31: Cyber Troopers Virtual-On for the Sony PlayStation 2.

NOTE: To play as Jaguarandi in the Sega Saturn version, a cheat code must be entered; At the title screen, hold down on the D-pad and then press the L and R shoulder buttons simultaneously. If done right, you will be able to play as Jaguarandi.

Compared to the boss version, Jaguarandi's defenses are watered down, meaning that it could take as much damage as a regular VR. In addition, its walking speed is sluggish and is a larger target, so dash as often as you need to. But worry not, it still maintains its signature set of weapons, especially the much-dreaded Trap Bomb.

When playing as the TG-11-M Guarayakha in Force, she features an Anger meter, which fills up as the battle goes on. If this meter reaches full capacity, Guarayakha will temporarily transform into a smaller version of Jaguarandi the size of a standard VR. During this transformation, take advantage of Jaguarandi's immense firepower to let your opponents have it!

A standalone version of the smaller Jaguarandi can be unlocked as a playable machine in Force by completing a certain number of missions. During gameplay, Jaguarandi possesses an infinite amount of weapon energy, which would give you a significant, if not unfair, advantage.

Guarayakha cannot transform into Jaguarandi like she could in Force. However, there is a Pro Action Replay code that allows the player to use Jaguarandi, but it only works in the Japanese version of the game.

WARNING: It may potentially cause the game to crash!

Although this machine is considered a "penalty boss" rather than a true boss, it is a difficult opponent for most players. There is a significantly higher chance of encountering it if the player attains a longer overall play time during the simulated missions. This, in turn, affects one's ratings and if the player's overall play time is long enough by the time that the 5th Mission is completed, Jaguarandi will appear as a compulsory opponent.

Shoot him until he retaliates, then dash around the arena until time runs out. Easier said than done, of course, since he makes extensive use of his bazooka...and if you happen to run into his spreading lasers, then YOU will lose thanks to the tight time limit. Oh, and don't forget those Trap Bombs!

For Temjin, Apharmd, and Raiden pilots, toss a bomb and he'll dash back. He can't evade during this sequence, so use this to initiate a counterattack.

Dash to either side, and he'll jump for no apparent reason whatsoever. He's also vulnerable when this happens, so let loose with your arsenal.

Another distinctive quirk about Jaguarandi is that when you lose to him and choose to Continue, you'll be up against him again, this time being smaller and less durable, but his offensive capabilities can still cause heavy damage. 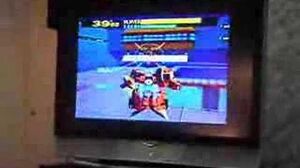 Jaguarandi (top row, left), with all the other machines in Operation Moongate