In The Blue Sky

Piercing through the flame, the invincible beam-sword makes the way for the winner!

This machine, along with its successors in the later games, serves as the poster child and flagship VR of the series.

The Temjin is a Main Battle Virtuaroid (MBV) and was one of the very first VR models ever developed by the DN Corp., the other being the HBV-05-E Raiden. What it lacks in armament it compensates in generally balanced capabilities and performance in battle against opposing VRs. Armed with a Multi Purpose Beam Launcher (M.P.B.L.), the Temjin can use it as either a beam rifle for mid- to long-range offense or a beam saber for close combat situations. The beam saber mode can even be used to fire slash wave energy projectiles at mid-range. It is also equipped with a Power Bomb, whose blast radius is also useful for blocking enemy fire, despite its low attack power. Because of its user-friendliness and versatility, it is a popular choice with both beginning and veteran pilots alike.

Resuming development of the XMU-04[]

The XMU project made it possible to develop a combat unit that is finally proposed for actual warfare after undergoing basic experiments using the prototype XMU-02 and XMU-03 units. At the time, two different types of combat units were planned. On one hand, emphasis is placed on maneuverability, with a unit based on melee fighting. The other is a heavily-armored unit of a fire support type. The former was given the model code XMU-04, while the latter is designated XMU-05. The XMU-04 is the predecessor of what would be called the Temjin.

Development was considered difficult. At the technical level of the time, it was extremely difficult, if not outright impossible, to fit all the functions required for this machine within the set skeleton. The prototype XMU-04-A that was completed at the outset had various issues and could not demonstrate satisfactory performance. The renovation work did not proceed slowly, and during that time, the XMU project itself was torn down by the pressure of the upper level of the company. The development of XMU-04 was also suspended temporarily.

Afterwards, with the discovery of the BAL-BAS-BOW unit, the V-Project was started, but eventually it suffered complications. 0 Plant, which was the department in charge, was forced to shrink significantly in both budget and work material, and was forced into a difficult position. However, they narrowed down their work to the development of the high-efficiency V-Converter, and as a result, the phenomenon of Reverse-Conversion was discovered. At this time, the XMU-04 and XMU-05 were brought to the eyes as test material. In regards to this decision, it appeared that there were circumstances in which most of the staff members in the V-Project were once involved in the XMU program.

A large-scaled Reverse-Conversion experiment was carried out, based on the basic data of the XMU-04 and XMU-05. It had proceeded smoothly, beyond expectations, and in V.C.0094, a newly-developed unit with a V-Converter equipped with M.S.B.S. ver.2 was completed, designated XMU-04-B. The new XMU-04-B showed that the problems with high performance so far was negligible.

The XMU-04 was first introduced to the real battle after the transition to D type from C type. At that time, it was decided that the fuselage was named "Temjin". Regarding the introduction of actual warfare, there was a disappointment that the timing was too rushed for combat input, but this could not be helped considering the situation at the time. At the time, there were still many directions to question the tactical value of the VR, and the highest executive committee was at the lowest level.

For 0 Plant, being able to demonstrate its effectiveness as soon as possible was an absolute prerequisite for their survival. For this reason, in V.C.0096, the XMU-04 was put into a forced evaluation test by introducing it into the Limited Wars.

However, the body of the fuselage was not stable in terms of completeness. The D type was a suddenly introduced variant on the behalf of the C type, which was originally developed as a fuselage for testing, so it was not fully tested at the time of deployment. When this became a real situation in battle, it became a factor that had caused various initial troubles frequently, and DNA units at the front lines were forced to struggle with the direst hardships.

In fact, the production fuselage was only 20% of the deployed units, and the military value was doubtful. However, the accomplishments achieved by the slightly operational unit were wonderful. The Temjin's exceptional mobility and fighting performance far exceeded conventional wisdom.

Establishment of the MBV-04 Temjin[]

The Temjin proved its effectiveness in the Limited Wars and created a new tactical category of robotic humanoid weapons called "Virtuaroids". As a result, the development of the Temjin was to be continued.

In the case of the E type, many of the mechanical defects so far were resolved and improved upon, and the armament was replaced with a more practical weapon, and the degree of the machine's maturation was increased. This work had almost reached perfection to the G type.

The fact that various high quality components were assembled with good balance means that the Temjin is not characterized as just a mere combat unit, but as a high mobility type fuselage that enables extremely versatile and flexible operations. For this reason, after the D type, the fuselage model code was changed to MBV-04 (MBV: Main Battle Virtuaroid) in accordance with the establishment of the Virtuaroid category.

There are two points that made the Temjin an excellent weapon, its nimble agility and the equipment of the Multi Purpose Beam Launcher (M.P.B.L.-7), a highly versatile main weapon. On the mobility side of things, the Temjin owes it to the practical use of a bipedal mobility system.

The development of this system, which was initially thought to be impossible, was as difficult as they expected. At its first outing in combat, it proved to be too unstable, and there was a voice from DNA calling for a fundamental review, asking for a radical overhaul. However, the development staff at 0 Plant showed extremely high response to the results obtained in battle, and patiently continued renovation work. As a result, the mobility of the Temjin became the most balanced among the first generation VRs.

The armaments equipped with the Temjin are not as much as any other VR. It is rather less. However, the Temjin's flexibility as a weapon is no less favorable than many models. Rather than saying, there are many points that are obviously superior. The reason is the M.P.B.L.-7, which is the main weapon.

The M.P.B.L.-7 is controlled via M.S.B.S. and boasts a high-efficiency responsivenss. As it can quickly shoot beams with variable trajectories, speed, and destructive capability in response to situation changes, it is remarkable effective for melee fighting under the versatile Virtual-On mode, especially at the combative distance of 400 meters or less. The breakthrough was the addition of a beam blade forming function. At the beginning of development, zero-distance combat between VRs was not expected at all. However, high maneuverability beyond expectations showed an unforeseen possibility of the VR's combat sequence. The data collected by a simulated battle between prototypes showed that, in the war between VRs, a zero-distance encounter would occur in the high establishment beyond previous expectations.

In battle within the zero-distance situation, injection of the beam projectile may damage the user's machine. Therefore, by adjusting the polarity of the barrel, and expanding the beam field by charged particles with a vibration cycle optimized on the barrel and its extension, the use of the sword to make a direct cut as a blade was devised. Blade formation can be done with less power than at the time of projectile injection, so the burden on the generator is low, and it was possible to instantaneously generate a sword with a maximum blade length of 50 meters. Regarding the key utility, it was questioned until the prototype was actually completed, but it showed outstanding power when used.

As a result, the M.P.B.L.-7 came to have a formidable ability as a melee weapon, improving the Temjin's potential as a weapon further. Of course, the M.P.B.L.-7 did not have the best performance at the beginning. Originally, this weapon was developed on the basis of ranged warfare at medium to long distance, so it was quite large and heavy. For this reason, it was difficult to manage the unstable bipedal walking system by the fuselage, even if it transitioned to D type at the beginning of the development, so the equipment was abandoned many times. In this regard, this problem would gradually be resolved by the weight reduction of the M.P.B.L.-7 itself (after Mk. 3) and by steady improvement (F type or later) of the aforementioned mobility performance.

However, it took a considerable amount of time to eliminate jamming, which was a chronic defect, and it is after it becomes the Mk. 3-b of the G type's equipment to see the conclusion of the settlement.

A grenade type weapon emitted from the Temjin's left wrist. As a weapon for disturbance and defense, it is standard from the earliest model of the Temjin onwards. Normally, the energy core wrapped in an octahedral crystal shell is stored in an inert form. At the time of firing, the energy core becomes active, and at the same time, is stabilized by the expansion of eight elements around the periphery of the beam field.

The element has a built-in VT fuse, and stops functioning when it reaches its critical setting. As a result, the beam field that has been deployed collapses and the internal energy core breaks down and releases its energy at once. The emitted energy forms a huge blast and it lightly deactivates it if is hit by a beam weapon or a live projectile weapon at the level equipped on ordinary VR.

Also, the destructive force of the blast is not weak. The setting of the VT fuse incorporated in the element can be arbitrarily changed when throwing the Power Bomb. However, in most cases, four to five setting patterns are prepared in advance, so that soldiers can use it according to the situation.

The energy enclosed in the energy core can be recharged by the excess output of the generator, even after the stock portion is exhausted. So, although in theory, the number of rounds is unlimited, there are limits to the crystal shell for the energy core fixation, and excessive energy recharging is not preferable, as it increases the burden on the generator. 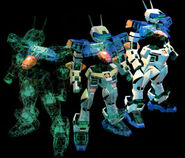 Images to be added!