Edit
watch 01:36
We're Getting Mutants in the MCU - The Loop
Do you like this video?
Play Sound

Klažeq-Mueller SGS (KM-SGS)
The RVR-44/2000 Cypher-2000 "FairBianca" is a non-playable second generation Virtuaroid featured in the Hobby Dengeki doujin Fragmentary Passage. It was piloted by Captain Sylvie Fang, the leader of the Rose Sisters.

Dr. Yzerman was a researcher affiliated with the 6th Plant "Satchel Mouth" (SM-06). He was considering several new Virtuaroid development plans using the first generation Viper series as the test bed. However, his plans were shot down by the 8th Plant "Flesh Refoe" (FR-08), which had enacted a ban on VR development.

However, secretly contacting Colonel Matthew of RNA, he succeeded in obtaining an important database, and eventually, he was able to complete the design proposal that far outweighs the prototyping protocols up until then.

The ambitious doctor sought to break away from FR-08 to shake off the constraints imposed on his research activities, and from the beginning, he attempted to seize full power within SM-06. The coup d'etat had succeeded, thanks to the complicity of Colonel Matthew, and was considered the darling of the times.

However, SM-06 was in danger of getting the blame for its embarrassing behavior and would face a crisis where it would be eliminated by FR-08. To combat the invasion of DNA forces, which were acting under the umbrella of FR-08 attempting to regain control of SM-06, Dr. Yzerman pushed for the design and development of the new VR of his own design. That is the YZR-4200 "Cypher".

Prior to the development of the new VR, Dr. Yzerman had created a new hybrid V-Converter that combines high efficiency and high output. With the new V-Converter loaded, the Cypher became a powerful second generation VR where mobility and attack power are combined at an extremely high level. Moreover, with the introduction of the transformation mechanism, it is possible to quickly enter the battlefront without the use of a transport and the like. As a result, a combat style unique to this machine with a blow withdrawal was established. It is largely due to the clever operation carried out by the private fleet of Colonel Matthew that significant battle results were gained against DNA.

SM-06, which fared badly in a stymieing struggle, survived the crisis by gaining asylum with the 4th Plant "TSC Drammen" (TSC) to support RNA. At that time, the political trading materials were done, and the Cypher was to be supplied to RNA under the model code of RVR-42.

The RVR-44/2000 "Cypher-2000" is a variant developed by SM-06, which attached special equipment to the RVR-42 base in response to RNA's requests. Its most notable feature is the Klažeq-Mueller SGS (KM-SGS) equipped on its right arm, which has more than twice the amount of offensive power compared to the Revenant series launchers that are equipped on the standard Cyphers. The KM-SGS also functions as the frontal nose for the Virtuaroid's "Leak Slasher" flight mode. As a result, the model has become lengthy, so it could be easily distinguished from the RVR-42's Motor Slasher mode.

The Cypher-2000 was deployed in very limited numbers among RNA's forces, and many people within DNA's ranks were doubtful of its existence.

Captain Sylvie Fang's personal machine, nicknamed "FairBianca", which appears in Vertical Impulse V.C.a3, is one of the few VRs of this type confirmed by DNA forces. The variable VR squadron lead by Fang consists of three female pilots, including Lt. Deborah Bite and Lt. Jennifer Poison, dominating the battlefield with overwhelming maneuverability and maintaining a courageous name.

Due to their unrelenting combat abilities on the battlefield, the three pilots were called the "Three Sisters of the Rose". Ironically, the latter would be established as a name within RNA before long. Of course, there was no one foolish enough to risk their mouths before their faces. 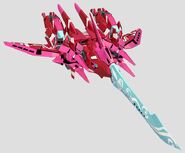 The Rose Sisters' VRs in flight, lead by the "FairBianca"