When the scarlet wind blows, all the ground-dwellers will be shaken by fear: The wind never stops till it cries "She's lost control!"

The Viper II, developed by the eccentric genius Dr. Yzerman, is based on the Temjin's skeletal frame, featuring minimal armor for extreme mobility and speed, but at the cost of combat durability. Designed for swift tactical deployment, this Virtuaroid is highly effective for breakneck speed and aerial combat against sluggish machines. It has a Revenant ver.1.666 multi-launcher in its right hand, which can be used to fire a full-auto beam vulcan gun or a seven-way spread of missiles. In melee, the multi-launcher can even act as a beam saber. It also has a BL-c04 beam launcher in its chest that fires a homing beam.

Development of the Support VR[]

In the early days of Virtuaroid development, there were only two distinctive concepts; the Main Battle Virtuaroid (MBV) and the Support Attack Virtuaroid (SAV), which were originally imagined to fulfill the roles of base defense and suppression weapon systems. The Raiden was initially slated to be an SAV. While its firepower and performance exceeded expectations, its manufacturing costs, as well as the intended weaponry, made mass production exceedingly difficult. Because of this, the DN Corp.'s squadron concept based on the SAV proved to be nigh impossible, thus they hastily commissioned the development of an alternate SAV and the TRV (Tactical Reconnaissance Virtuaroid). The SAV-07 Belgdor has the former covered, while the TRV-06 Viper series was ideal for the second role.

In an offensive concept, the tactical reconnaissance role is a step-up above traditional armed reconnaissance. It was assumed that in a VR squadron, the MBV-04 Temjin would be the core strength behind it. The bad news was the Temjin would not be viable in high-mobility combat, leading to a change in circumstances beyond conventional wisdom. Thus, to achieve maximum combat efficiency, even at the current moment on the battlefield, a continuous supply of real-time information was vital.

At that time, one-on-one data transmission between Temjin units naturally came with large-scale reconnaissance action to maintain field balance. Because such activities occurred concurrently, this would require practice with the Temjin. Alternatively, a reconnaissance unit with mobility that exceeded the MBV is what was truly needed. Acquisition of aerial mobility (with jumping) far surpassing that of the Temjin was especially effective for maintaining field balance.

However, the possibilities presented by collaborative efforts with MBV units that were always caught up in the conflict couldn't be underestimated, along with the fact that the tactical reconnaissance unit would also be in the heat of battle. Good offensive capabilities would be demanded, especially for the TRV, since its armor would be sacrificed for the sake of higher mobility. *Combat methods for finishing the fight, such as pushing the envelope is not favorable. Naturally, armaments optimized for a breakaway attack are needed.

(*: Sentence's exact wording not entirely accurate due to differing translation results from Google Translate and the Bing Translator)

Designing a new frame for the TRV role was not ideal and would have been far too expensive. Because of this, the DN Corp. had no choice but to use the Temjin's skeleton system combined with the basic design of the XMU-06 in the TRV's development plan. At the time, improving on the TRV's mobility performance was of paramount significance.

First off, the required tasks was to enhance the capacity of the generator amplifier so that the generator's power output would be comparable to that of the Temjin. This was expected to bring the Virtuaroid's mobility and agility to unprecedented levels. The next step was that of defense. The TRV's armor plating was made in the minimal required level, with its ballistic resistance being described as "paper-like". While this boosted the TRV's mobility and agility, it would mean that only foolhardy or veteran pilots would deem the machine viable in a true combat scenario. (However, the Viper II was, and is still, a force to be reckoned with when operated by experienced personnel).

Thus, the XTRV-06 was born, boasting mobility and agility exceeding that of the Temjin. It had surpassed all expectations in its performance tests with varying results and with not much trouble, gaining the satisfaction of DN's stockholders alike. From there, the new TRV was given the name "Viper".

In V.C.0097, a terrible event had occurred during a test flight of the Viper prototype, wherein the pilot had lost his life following a horrific crash.

Visual material had shown that the Viper had disintegrated, making evidence as to the cause very scarce, rendering the investigation all but impossible. Fortunately, the survey team had found only one item at the wreck: a voice recorder. This caught the interest of various people. Subsequent analysis of the data found in the device was a recording at the time of the accident where the pilot screamed his last words, "She's lost control!! Out of control!!"

It was believed that perhaps the Viper's control system had somehow malfunctioned, leading to the Virtuaroid going haywire before it crashed and burned. In order to confirm this suspicion, significant research and testing had continued, during which there was substantial speculation.

The cause of the accident was determined to be structural in nature. In order for the Viper to possess its distinctive extreme mobility and agility, its generator was mated to a large-capacity amplifier. However, this would place heavy strain on the Virtuaroid's structural integrity and the control system. For Virtual-On Positive (VOP) pilots, the output skyrockets to levels that far exceed expectations. At the time of the accident, there was a left-over amount of energy that couldn't be processed by the generator, so when the test pilot had attempted to use it, it destroyed the control system. This led to the Viper becoming uncontrollable and self-destructive, resulting in the crash that had destroyed it.

The cruel fact was that this problem was anticipated from the very beginning. However, this had haunted the VR's unreasonable development schedule in that regard due to an incomplete limiter configuration. Because of this, calls were made by DNA to develop immediate countermeasures for this design flaw at the plant side.

The Viper revealed a fatal flaw that resulted in its temporary disuse. However, the prospect of an alternate model was notwithstanding, as the need for the TRV was made keenly aware of.

The first correspondence would be a partial renovation of the Viper. Despite this, results due to work issues wouldn't be ideal. Renovation work on the Viper would require a drastic and radical policy change, especially with replacing the F-type by the development staff. At the same time, the service code was changed to TRV-06k.

Under the new policy, the Viper's structure was thoroughly reviewed and given enhancements. Autonomous Thermal Plate Binder wings were attached to the back, along with structural reinforcement work adding to the weight and a changed appearance. For this reason, in V.C.009b, the Virtuaroid was re-designated "Viper II".

The Viper II was formally adopted in V.C.009d. Its performance is rather inferior to the original Viper due to the extra weight, but the improved stability was worth the cost. On the other hand, it cannot be disregarded that the Virtuaroid is also capable of a special maneuver: the so-called "S.L.C. Dive".

The Thermal Plate Binder system on the Viper II's back were not intended to generate lift but to provide high-efficiency heat dissipation due to the high mobility. Practical observation, though, had seen a peculiar behavior from the previous VR for its V-Converter, referred to as "autonomous exothermic reaction".

To elaborate on heat transfer principles, the nature of the binder plates' enhanced heat dissipation was not entirely explicit. When a thermal binder plate made of a specific material is deployed along with the V-Converter, the heat dissipation is empirically enhanced. The Viper series is the first VR to be equipped specifically for this particular phenomenon.

During the transition to the Viper II model, the Thermal Plate Binders were originally to be removed. When the autonomous exothermic reaction is enhanced by the binder plates, this placed a heavy mental burden on the pilot via feedback action through the Mind Shift Battle System.

However, at a later time, the binder plates had to be positively reinforced in order to resolve the S.L.C. phenomenon of the Viper. The excess energy from the amplifier's overdrive state was to be deployed through the binder plates to the Virtuaroid's outer periphery to create a spindle-like energy field. During this time, the VR loses control, but since inertial flight towards the target being locked in is possible before this, its body shifts to a diving ramming attack, much like the kamikaze maneuver frequently employed by Japanese air force pilots during World War II.

The potency of the S.L.C. Dive's energy field proved to be great, more so than with the VR's armaments. However, this did not thoroughly solve the problem, as the excess energy from the amplifier did not dispel completely even after constant repairs and renovations.

As what would potentially be a sick joke or in honor of the fallen test pilot of the original Viper from that fateful accident, the Viper II's devastatingly powerful maneuver would be given its name. 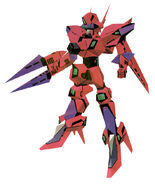 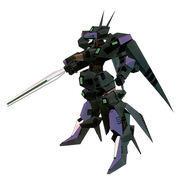 Close-up of the Spandau blocks

The Rose Sisters' VRs in flight 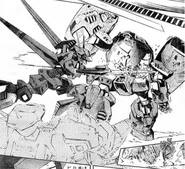 Viper I ver. α strikes down an enemy Belgdor