The V-Converter is a recurring technology in the Cyber Troopers Virtual-On series, both in the games and the lore.

The V-Converter is the core of a Virtuaroid's system, also containing the machine's cockpit unit. It is a device that contains a V-Disc, the core component which has a Virtuaroid's blueprint data on it. The V-Converter initiates Reverse-Conversion, by reading and materializing the blueprint data onto the physical plane. The V-Disc is created when a V-Crystal is crushed and evenly shaped into the form of a giant, CD-like disc.

Two years after the discovery of the Moongate and its esoteric OverTechnology by the DN Corp., the beyond-top-secret R&D facility, "0 Plant", was established to research and reverse-engineer it.

In V.C.008f, the DN Corp. conducted an experiment to try and reactivate the BAL-BAS-BOW unit, by the means of the "Crystal Core Support System", a black box device powered by a V-Crystal. The Crystal Core Support System was installed in the first pole of the BAL-BAS-BOW unit's medulla oblongata area, with a temporary cockpit installed in the second pole. An M.S.B.S. control system used by several human operators was also implemented.

However, because the Crystal Core Support System was attached directly to the first pole's rear end, the operator couldn't control the feelings of the moment, causing a failure in the M.S.B.S. control system, resulting in the V-Crystal core malfunctioning and creating a Gate Field to the C.I.S. Two-thirds of 0 Plant's personnel and important resources disappeared into the C.I.S. A large but unknown number of scientists stationed at the facility were involved in the accident, which had proven costly to the DN Corp. in terms of manpower and resources. As a consequence, 0 Plant was shut down. But, there were lessons learned from the failed experiment, as well as from examining the BAL-BAS-BOW unit's structure. The DN Corp. developed a miniaturized version of the Crystal Core Support System, the V-Converter, with which they would develop the very first Virtuaroids. 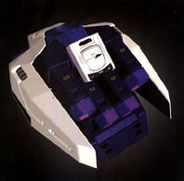