Vok is a series of second generation VRs developed by the 3rd Plant "Mooney Valley".

After the emergence of RNA, the demand for a 2nd generation-type VR increased within the 8th Plant "Flesh Refoe" (FR-08) and in DNA. The 3rd Plant "Mooney Valley" (MV-03), which produced the famed HBV of yesteryear, the Dorkas, began development of the new type VR in response to this request.

However, as the contents of the request was changed in the morning, work proved difficult. Based on a prototype skeleton for an MBV that was under development, they first created a compact VR named "Vok". A basic unit, Mooney Valley aimed to develop the Unit Skeleton System (U.S.S.) which can fit armed units onto the outer shell, mainly the upper body, in response to various applications as requested by the military side.

It was a groundbreaking idea that could present a single answer to the theme of "versatility" required for the 2nd generation VR. The completed prototype had a single shell that covered the main body of the Vok like a coat forming a further upper arm. This innovative fuselage, which was adopted formally from V.C.a2 onwards, has created a number of derived types which could be comparable to the Apharmd series on the RNA side, utilizing the flexible structure based on the adoption of the U.S.S. technology.

The U.S.S. technology would be inherited by the third generation VOX series of VRs. 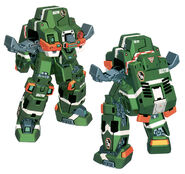 More images to be added!